After the plumber left we had a couple of good days of fine weather, and then it poured down. As far as I know the storm water drainage worked like a charm. No issues. Sunday was the worst day.
Monday dry. On Tuesday I get a call from the concreter, they are going to come in with an excavator and complete the bulk earth works. Fine I say. Some progress. (I have not completed the concreteing post yet - so this may be a bit obscure).
So "Lefty" duly appeared with his excavator and started moving dirt around and laying road base, all according to plan. Then the air turned blue as a stream of swear words were injected into the atmosphere. I had a look and saw the excavator tilted over with its right hand side wheels sunk about a foot (300mm) into the earth. Right on top of the new storm water pipes.
So yes it sucked. Between the invective I worked out that Lefty considered the plumber had not back filled their trench correctly and that they were a bunch of cowboys and that he had heard the storm water pipe break. So there was a period of frenzied digging to expose the pipework and sure enough the pipe had broken at a join.
I then had to put up with a self righteous justification of why it wasn't Lefty's fault that the pipes must already have been broken and the plumber broke them, etcetera.
Quite honestly it does not matter, I expect that I am going to pay for it one way or another and when I looked at the damage and causes, I could see that Lefty could not have anticipated how soft the ground was. Also that the pipes were perfect before the ground collapsed under him as I had watched the back filling and know that no undue pressure had been applied to the pipework. After the rain the area was a muddy mess, it was almost pre-ordained that there would be issues. Lefty maintained the theme that the pipes were already broken for the rest of his time there.

Ultimately the pipes were repaired and the final bit of earthworks completed.
The Bludger almost didn't care, water off a Duck's back, these things happen.
It is raining again. Heavily.
Sigh

It all started simply enough, with blocked downpipes on the house. In a heavy down pour over the Australia Day weekend I discovered that I had a lovely waterfall as the gutters overflowed.
A few days later I got out a ladder, cleaned the gutters out, which had about 6 years worth of debris in them and then looked at the downpipes.
I quickly established that it was beyond me to clean them out. So I called in a so called expert. To my dismay he put a hose in the pipes, as I had done, watched them fill up, as I had done and pronounced the problem to be beyond him to fix. He charged me for doing what I had already done myself.
Not impressed I engaged a plumber with an "Eel" to come and clean out the storm water pipes. The plumber had to cut access holes, then quickly told me that it was beyond him to fix. He also charged me for the cost of doing nothing. He wanted cash for this work and to add insult to injury could not find $2 to give me change when I came up with the money.
The plumber telephoned his manager and they then suggested that the current storm water system should be bypassed and quoted over $6000 for the job. What a croc!
I got some other quotes and found someone to do the job at less than half the cost of the original quotation. For this price he was going to connect 2 downpipes for the house and 2 downpipes on the garage and link them all into the storm water system. An excavator would be brought in to do the trenching.

That work was completed this morning. All up about 5 1/2 hours work.
The Bludger is pleased to tick off another task.

I confess that I have been reluctant to start prettying up the rest of the house. Still a lot to do outside and it is easy to ignore the interior.
But with the Laundry now complete, the driveway in the hands of contractors, the plumbing in the hands of contractors I need to kick on. My choices were the toilet or the master bedroom next. The toilet comes with consequences in that it will be out of action for several days which means that I will need to get back to nature for certain bodily functions. So I started on the master bedroom.
On paper all this needed was a cleanup and few coats of paint. Ahhh, if only.
I started by painting the built in wardrobes. These were bare chipboard and looked pretty tacky. A coat of base which included primer, sealer, undercoat and something else was a start. Then 2 coats of white door paint. The wardrobes came up a treat and look much more appealing. Certainly something that I would consider putting clothes into now. The second bedroom also had a built in so I painted both at the same time.
From this: 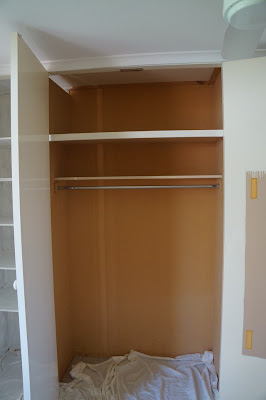 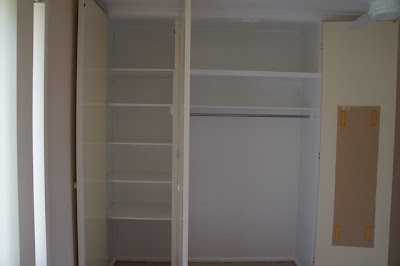 The Bludger is becoming an old hand at painting now, but the next stages will be hard work.

The first in a series, I hope, of blogs about the ongoing renovations of my investment property in Canberra.
I have owned the property for over 6 years and in that time it has been rented out and tenanted. I had very good tenants but they called me several months ago and told me that things were falling apart. I flew to Canberra for a look and realised that they were correct. So in the back of my mind was the thought that I should move into it and do some renovations.
Well that opportunity came with my current period of unemployment. I relocated in mid December but I then took two weeks off and did not return until early January. With the benefit of living in the place I have begun to see what the tenants were talking about.
While there is a lot to do my first major project has been the Laundry. Below is the before picture. Vinyl floor, wash tub, some shelving and that was about it.
I decided to tile the floor, put in some cabinet storage and generally brighten it up.
Removing the Vinyl was easy, although there is the concern that it may contain asbestos. I have since learnt from my neighbour that the vinyl probably went down in 1972/3 when the house was built.
Under the vinyl I found some Masonite or similar and that came out easily too. This revealed the original floor boards, which were in good condition except for a large hole around the sink area.
Unfortunately I found that the floor was not quite level, in particular a huge curve upward along the wall by the door and window. That set me back several days while I sorted it out. I ended up shaving off a large chunk of the offending floor board, this took ages as it was difficult to access due to its closeness to the wall.
Once leveled the next task was to lay "Villaboard" over the floor boards. This stuff is fibre cement based and ends up being incredibly heavy. It was difficult handling these on my own until I had cut them to size. Also it comes with a warning about inhaling cement dust when you cut them up.
Most of the above work was done in a heatwave and to be honest by lunchtime on most days I was feeling the heat and could not continue. No air conditioning in this house!
Tiling was next but that had to be delayed due to the extreme heat. The mortar sets too quickly and becomes soft and does not hold the tiles well if the temperature is too hot.
When I did set to, I went to great lengths to align the first row of tiles, drawing marks on the floor to guide me. In my enthusiasm however I neglected to notice that the mortar hides the pencil marks and I did not check thoroughly. My first row was askew and the whole floor had to end up following that skew. It meant that the tiles were not correctly aligned, but I disguised that with a grout the same colour as the tiles.
By the way those tiles were solid, I spent 4 hours cutting the circle for the waste pipe and had only got half way there when I got careless and broke the tile. That tile is hidden under the wash basin, so it probably does not matter.
I also put a half tile along the wall to make a seal that would not matter if it got wet during accidental flooding and mopping up the floor. I actually caused the first flood when I failed to assemble a tap properly.
Next was cabinets, laundry tub and benchtop. One of those times when I really needed the advice of a person with an eye for esthetics not my inability to match colours and styles. This involved a trip to Ikea in Sydney and a fair bit of design work using their planner. The outcome was great. I was helped onsite by a young girl (well that's what she looked like to me), I was suspicious of her experience, but she certainly knew her products well and I had to give her a mental apology for ever doubting her.
During the build I changed my mind several times on the design of the bench top. The first design was a continuous bench incorporating the wash tub, bridging the gap between the cabinets, with the washing machine underneath. Then I realised that future tenants may need a top loader washing machine, so it became bench tops only over the cabinets. Finally I realised that if I put a removable section in the gap where the washing machine goes then I could cover both a top loader and a front loader and it made it much easier to install a washing machine of both types.
Here is the finished Laundry.
All up it looks pretty good, but there are a few edges that don't meet properly, and after flooding the Laundry I discovered a run off and pooling that indicates they are not perfectly flat. However the room survived the flood very well.
To pick holes in the finished product. I made a mistake on the splash back and had a rather large gap in the corner, that I filled with Silicone. The cabinets are not perfectly aligned, but the wall behind them is not straight either. The external door is falling apart and will be replaced as part of the "external security" project. The window is in need of attention.
You will see a line in the benchtop, this is the removable section above the front loader washing machine to allow for a top loader. That is also why I did not relocate the plumbing which looks a bit ugly above the bench.
The Bludger is pleased to see one project behind him.
Posted by Unknown at 14:30 1 comments