Ah the Circus. The Great Moscow Circus. A chance to indulge in childhood activities again. Time out from the responsibilities of life. Time out to recall the child within. Time to let the emotional part of the brain take over from the rational, logical part. Time to simply have some fun.
The Great Moscow Circus is in Darwin. It has been here for 2 weeks. I was aware that it was the last day so on an impulse as I passed the Ticket Office I stopped the car and inquired if they had a ringside seat left. Yes they did, one only for the evening performance. I bought it.
My memories of the traditional Circus are vague. Certainly as a child I am sure that I went to a Circus, but I cannot remember. My Circus memories come out of books and what I have seen as an adult. The ones that I remember most was a performance of Circus Oz in Adelaide, maybe 25 or so years ago. This was not a traditional Circus but more a show of athletic, gymnastic and creative ability. Then there was a traveling Circus in North Sydney many years later, possibly Ringling Brothers, certainly a traditional Sawdust circle under a big top. It featured all of the usual items, human pyramids, balancing acts, jugglers, clowns, trapeze artists and even Lion Tamers. It was one of the last to feature wild animals. The males on the trapeze all had slim lithe bodies and broad shoulders, the females had figures to die for, wore glittery costumes and I fell in love with each one. Apparently that is very traditional for a circus.
Later there was the huge spectacular Circuses. I have seen several of the Cirque de Soleil shows including, Saltimbanco (my favourite), Alegria, and Quidam. All huge events but far removed from the traditional circus.
So I approached the Great Moscow Circus with an open mind, expecting to be entertained but little else. I suspect that Darwin being a small city, we end up with only a subset of the performances that major cities get, maybe so, maybe not so.
Show time approached and while we found and then sat in our seats we were "entertained" by people selling ice creams, balloons and light sabres. Everyone has to make a buck somehow. The audience had a large amount of family groups but as a gentleman of a "certain age" I was by no means out of place.
The show started and the clowns came on to warm the crowd up. Never really been a fan of the clowns and the warm up. I understand the necessity but frenzied screaming to answer trite questions has never been my thing. "Is there anyone out there?"...the crowd says a restrained "yes"..."I can't hear anyone. Maybe they are all asleep. Shout if you are awake"...the crowd cheers..."I can't hear you"...the crowd roars..."Oh was that a mouse squeaking?"  and so it goes.
So the tight arse Bludger sat in silence, dutifully clapping if someone looked his way and pretending to have fun. This led into some fantasy tale about Medieval Russia and featured characters that looked straight out of Tolkein such as Gandalf the Wizard, Ents (trees that walk) and other things. I lost the plot on this and so did the performers as there was only one other reference to the fantasy later in the show. 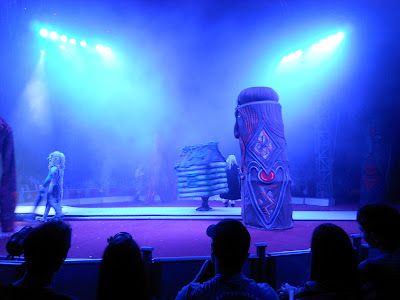 The real show started with an athletic show that involved swings used as an aid to propel acrobats high into the air and catch them at the other end. They rolled and spun and twirled and made death defying feats look ordinary and everyday. Yes it is all gravity and laws of motion but hey it looked good. By this time my inhibitions had subsided and I was clapping and cheering as hard as any of the children. 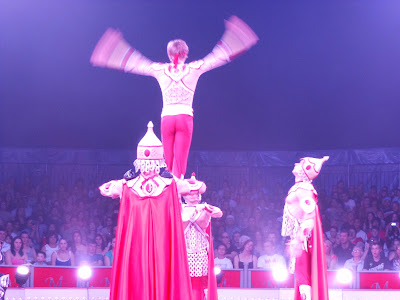 The show led on to other things. A Clown that overinflated an over sized rubber balloon and somehow managed to end up inside it. That was clever. An athletic routine that involved jumps off and onto a large trampoline, bouncing high enough to take your breath away. I caught 3 errors on this, 2 acrobats that almost did the classic fall through the springs on the side and one who offloaded and did a face plant. Maybe at the end of their season they were tired or not concentrating.
Then there were two trapeze acts all spectacular and yes the girl on the trapeze was gorgeous and lithe and slim and athletic and if ever she should feel lonely she can give me a call. A show involving Shetland ponies, running around the ring. Well it got the kids up and laughing and clapping. No Lion tamers or Tigers or Elephants. Not allowed in these highly conservative, politically correct times.
And then the finale. The finale being motorcyclists in a cage - often referred to as "The Cage of Death" heart stopping, I did not believe that so many Motorcycles could be in the cage in motion at one time. 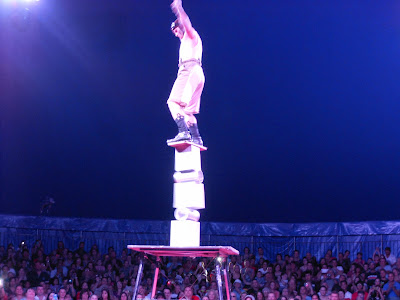 So all in all it was a wonderful evening, very entertaining, an affirmation of the existence of a child still hidden inside the Bludger.
Disclaimers
No animals were hurt in the course of writing this blog.
The author paid his own way and is not associated in any way with The Great Moscow Circus.
The author has no financial relationship with people who ride or operate motorcycles in cages.