On one of the main roads, the Stuart Highway, leading into the Darwin CBD you pass by Sexyland on the right hand side. As you may gather, from the name, Sexyland sells adult erotica. Allegedly, because how would I know? It is said that you can purchase magazines, DVD's, clothing, blow up articles, things that need batteries to work, similar things that do not need batteries and a host of other stuff that consenting adults know about. However my eyes are drawn to what is on the opposite side of the road. A small, somewhat dilapidated looking shop called Warung Ibu Amye. The signage proudly declares that it sells Laksa, Indonesian food and Timorese food. On Friday and Saturday nights there is a sign outside advising that "Amees famous spicy BBQ Chicken" is on the menu. The name in English means something like Amye's Restaurant. 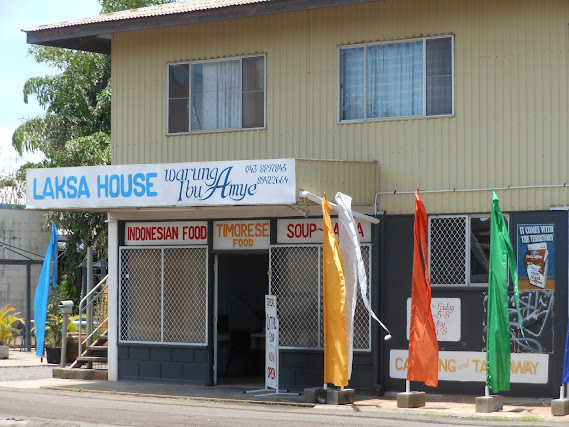 Woolworths - the fresh food people - NOT!

In Australia one of our Major Supermarket chains brands itself as "the fresh food people". The following pictures were taken at my local Supermarket, Woolworths Nightcliff, on Thursday April 14, 2012 at 4:09pm. My contention is that they are not providing fresh food. 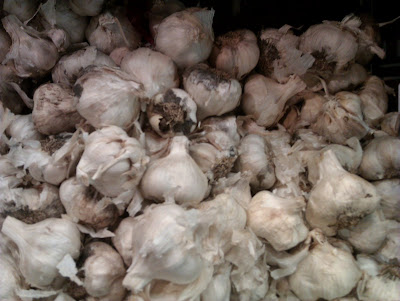 In the above photo the garlic is covered in black "stuff" and many cloves are in various stages of decomposition. Quite frankly I cannot see how this was allowed on the shelves. 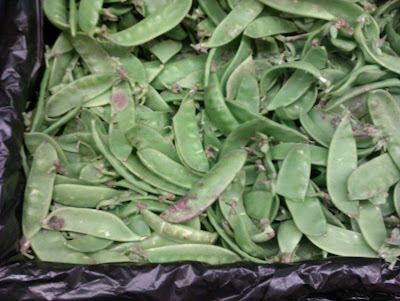 The snow peas were worse. Once again I cannot believe that they were out on the shelf for sale. The black bits that you can see is where the snow peas are decomposing. If I had intended to buy some I am not sure that I could have picked out the "good" ones. When you think about it, if some are already decomposing, the others are probably very close also.
Wonderful food from the Fresh Food People.
The Bludger is rather disappointed.
Posted by Unknown at 17:59 2 comments

Well I have called this Gado Gado for want of a better name, and it was inspired by an Indonesian recipe for Gado Gado. 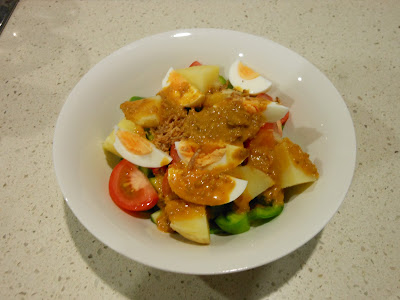 Recipe
Well it was all a bit of a throw together, but hey gado means mix.
1 x small Pak Choy - leaves separated from stems and sliced, stems sliced into pieces.
1/2 Lebanese cucumber, cut into chunks
1 x Tomato cut into segments
1 x hard boiled egg, cut into segments.
1 cup of green pepper in chunks
1 x boiled potato, cut into chunks.
(basically everything into fork sized chunks.)
1 x handful beans - blanched
1/2 of one of my ultra hot chilli thinly sliced.
a dash of fried onions - bought from local Asian shop
a spoonful (and then a bit more) of Gado Gado sauce - from a can - warmed.

An explosion of flavour and relatively healthy.
The Bludger washed it down with a G&T.

Yin and Yang. Coins have 2 sides. A see saw has one end up while the other is down. A big night on the town means that the next morning will be miserable. It was.
I made it to my property and spent a solid couple of hours inspecting the house and property and working through the list of issues that the tenants would like fixed. The property manager was present and during the course of this it became apparent why my property manager is so ineffective at achieving things. I suspect that this is his first job as a property manager. He is certainly not a practical person. Most of the issues could be fixed by a handyman and the manager did not seem to be able to arrange for one. They bleed a percentage of my rental income and should be competently managing these things. I will repeat that "should be competently managing these things."
I have not been to the property for 6 years and overall it was looking good. The major issue is a large area of concrete including the driveway that is now degraded, lifting in some places due to tree roots and in the words of the tenant presenting a safety issue as it is a trip hazard. A sizeable sum of money to fix and not recoverable in increased rental in the near term.
After the inspection I found a coffee and late breakfast and then headed into town for some shopping. Darwin does not have a wide range of clothes shopping options so it is important to take advantage of such opportunities. I ended up with some new business shirts and casual shorts. In the process I kept bumping into Jonathan Thurston a well known Rugby League player. For the record he buys Calvin Klein underwear.
I whittled what was left of the afternoon away and then returned to the airport, for my flights home. The return was via Sydney this time. Another delay in Sydney, due to the need to wait for a crew member. Once we were on board they explained that we had to wait for a relief crew member as the rostered person had fallen and hurt herself. Suddenly it didn't matter that we were delayed, we had a reason and an explanation. Why don't the aircrew do that all the time when delayed?
The Bludger arrived home just after midnight after a short but successful trip.
Posted by Unknown at 12:40 3 comments