As I mentioned in an earlier post, this is a year in which I encounter a number of significant birthdays for family and friends. The trouble with starting this line of postings is that you could justify almost any birthday as significant and worthy of writing about. The other trouble is that next year a cycle of birthdays starts all over again, maybe it is a lifetime occupation writing about them all. But I have restricted myself to a small number.
The most recent was celebrated over Easter. Long time friend Georgina celebrated her 50th Birthday. It's open knowledge, I am allowed to say 50.

I first met George when we were both 16. I had joined a senior scouting group, Venturers. This was a progressive, some would say radical, group as it had abandoned the wearing of traditional scout uniforms and merely had a club t shirt to identify it's members. It was also one of the first groups to have an openly gay assistant leader, much to the consternation of many parents. But that is another story.

George was a strong minded person and showed great leadership even in those days. Over the course of the next 2 years when we were able to progress to the next level of scouting we went on hikes, camping, canoeing, mudsliding, gliding, wine tasting, car rallys, music events, water skiing and a multitude of different activities. In all of those activities George was almost invariably leading the charge.

After (failing) Matriculation (aka year 12) George joined the Police Force and developed a stronger interest in flying. This eventually led her to bush flying in the NT, Tourist flights around Wilpena Pound, RFDS and ultimately into QANTAS as one of the first female recruits into pilot training. The seventh from memory.
Meanwhile I had been pursuing my own career and travel goals. This meant that there are great chunks of our lives when contact was minimal. But still there was contact, I remember meeting her in London while I was working there and she had stopovers. At that time George was a second officer on the 747 and regularly flying the "Kangaroo" route between UK and Australia.

By chance we both ended up living in Sydney at similar times and by great coincidence ended up living a mere 150 metres apart. This naturally gave us plenty of opportunity for catch ups. I have lifetime memories of after closing time "lock ins" at the Belgium Beer Cafe which was disastrously close to where we lived. Also raiding the cellar of Stuyvesants House Restaurant in Crows Nest. This place has the most extensive wine cellar that I have ever been in. On the day that the world ends I am going to break into it and armed with only a cork screw attempt to empty it.

George was married a couple of years ago, it doesn't seem to have slowed her down, rather she has found a like minded partner.

All of the above was meant to just highlight that I have known George a long time.

As to the recent celebrations. I was invited to join the festivities several months ago and apart from making a note in my diary hadn't really thought much more about it. The details were Easter Monday to be held on the banks of the River Murray at the family river shack. This was going to be easy for me to attend as I had planned to spend Easter with family at Callington, which is a short drive away. In the back of my mind I was expecting a few drinks and a BBQ with a small group of friends. Imagine my surprise when I discovered it was to be a fully catered function with 40 expected guests.

After a cool week the day turned out to be a cracker. A cloudless blue sky, the day a predicted 25 degrees but with the sun beating down it felt much warmer. Arriving about on time, I was directed by John to where I was staying for the night and into a carpark where I could make an early getaway in the morning.
Pre lunch drinks commenced with French Champagne and a selection of Beers, Wines, soft drinks and water. Being a warm day the water was soon finished. Canapes were served and the mood became relaxed and jovial. 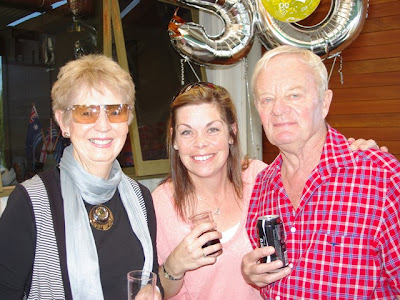 Lunch consisted of roasted meats, potatoes and vegetables. The setting, quantities and atmosphere was excellent.

It then became speech time and the lady of honour was first introduced by John, her husband, and then took stage herself. The sun beat down and health toasted, cheers raised, absent friends remembered, including the ANZACS (it was indeed ANZAC day). 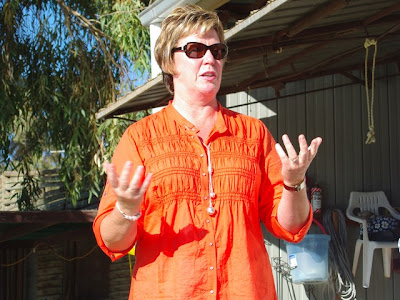 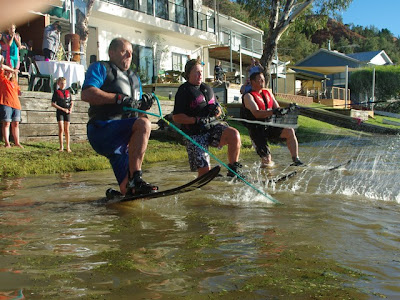 I won't embarrass anyone with details of who fell off, but needless to say it took a couple of starts before all three were up and skiing.

The afternoon was spent very pleasantly on the river side. Some people skied, some watched, everyone socialised and the festivities never stopped and went on into the night. Later there was dancing, more food and a very agile Adelaide news presenter showing great agility with feats of athleticism and flexibility putting many younger people to shame.

I left the party about that stage as I had an early start. I snuck out quietly after a quick very public dance on one of the tables.