I really wanted to show PeaPa a little bit of the north of Bali, so we engaged our friendly driver, Rahde, to take us on a day trip to the north.
Our first stop was a temple complex, called Pura Ulan Danu, built on the shores of a lake. It is a huge tourist attraction and we were there in time to see some ceremony of which I have no idea what it was about. But the participants certainly looked wonderful in white tops and yellow sarongs. 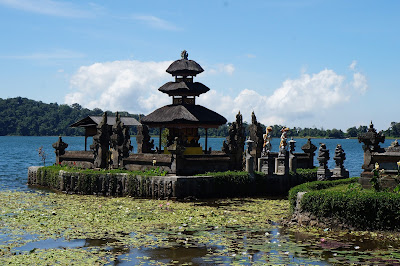 Rahde then took us up a hill to give us elevated views of lake Batur and then on to lunch.

We then headed down to some hot volcanic pools, Banjar Hot Springs, and had a swim. Well PeaPa chickened out and I swam. Apparently I was purified during this process. 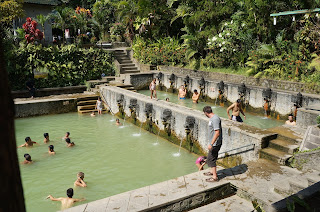 Our next stop was one of the most delightful Buddhist Temples that I have ever been to. That was the one time that I did not have a camera with me. Brahma Arama Vihara Buddhist Temple is extremely well maintained and covers a large area built onto the side of a hill. It is used as a meditation retreat and it is meticulously maintained. If ever in North Bali put it on your visit list. It has little courtyards with trees and pools, fountains, a large communal prayer area, various temple areas and it feels really peaceful.
The day was progressing so we had a very quick stop at Lovina beach and then headed back to Ubud.

The Bludger was pretty tired but we did have yet another excellent meal.

Leaving our lovely accommodation in Seminyak we moved to Ubud for a change of scenery. Along the way we visited Taman Ayun. A large temple to the west of Ubud, I think that it may get the title Royal Palace.
From there we made it to our new accommodation at Suly Resort. This place was fine, my only minor criticisms are that it was a little too far from the centre to walk to Ubud and they needed a pop up toaster at breakfast time! The resort does have a shuttle bus service which we did use but found it more convenient to organise our own taxi. But I did spend some time in their lovely pool and enjoyed talking with the hospitality students who are employed around the resort.
Unfortunately PeaPa had picked up a cold and that limited our travel experiences a little bit. But it was certainly good for her to have a couple of days rest as she works long hours 6 days a week. Holidays are not just about seeing everything and doing everything sometimes doing nothing is good also.
However we did get out and about. We engaged a friendly taxi driver, who ended up becoming our regular driver for most of the days. He had a nice clean taxi, was a responsible driver and spoke sufficient English to be able to explain some of the sights that we saw.
Our first trip was to the nearby Goa Gajah temple. Known as the Elephant cave it is a site that now encompasses the cave, a surrounding temple and walks to other temples and waterfalls. We spent a couple of hours there and I even managed to get PeaPa to take a walk along some of the paths.

That particular drive also took us to a Coffee Plantation which makes the Luwak Coffee. In this process the ripe coffee fruit are eaten by a small animal and the beans extracted from the faeces before cleaning drying and roasting in the normal way.

According to those who know best the enzymes acting on the coffee beans removes some bitterness and alters the taste of the final product to make it the "best" coffee in the world. Personally I find that you can do more damage to coffee in the roasting, grinding and boiling processes that far outweigh any small benefit from an animals gut.
But who am I to know. The driver insisted that we go there, he was obviously on a commission, but neither PeaPa nor myself were very interested. I sampled their teas out of politeness.
That ended our first outing, the driver dropped us at a restaurant in Ubud and we made our way back to the resort later.
The Bludger realises that he needs a 3rd post for the rest of the trip.

Or maybe I should say a whirlwind posting of our Balinese Holiday.
Departure from Don Meuang Airport 6:20 am. That meant being at the airport at 4:20 am which meant leaving Ayutthaya no later than 3:20am. As it was we left at 3am, had a dream run to the airport with no traffic, almost no wait at Check-in, and Immigration and had far too much spare time to wait.
I would rather be early than late.
Once again our arrival in Denpasar was a dream run with only a slight wait for baggage, but that allowed us to use toilets etcetera.
Our hotel had sent a driver to pick us up, who apologised for keeping us waiting (he didn't) and delivered us to the hotel in time for us to have a shower and then consider lunch.
Our accommodation at Sally's Bungalows was lovely, we had a Bungalow designed for 2 couples and the other couple had to cancel. So we had a huge place to ourselves.
The accommodation included a swimming pool shared, but rarely used, with the other Bungalows. Often I had it to myself as PeaPa rarely swims.
The next few days were a bit of an odd time. Ostensibly we were there to help a friend celebrate a significant birthday. Due to cost we had decided to stay seperately, although very close, and so did not see as much of them as I had anticipated. We also were working on different time schedules, their breakfast time was 10am, where as I was up and about by 6am and finished breakfast by 7am.
We did catch up that first night and went to a Moroccan Restaurant which featured some Belly Dancing.
We also caught up the following evening, Saturday, which was the official party, and the final night for Pizza.
So instead PeaPa and myself entertained ourselves.
One night we headed to Jimbaran Beach for a Sefood BBQ, which was held on the beach, it had a lovely atmosphere but the food was unfortunately not very inspiring.

We also had a rather lengthy tour of the Eastern part of the Island and took in the sights at Tirtaganga, a series of pools fed by underground water, visited a couple of temples including Goa Lawah and had lunch at a lovely restaurant enjoying the cool sea breeze and views at Candidasa.


On another day we visited Tanah Lot another lovely area with a Temple built out on a rock and headland overlooking the beach. 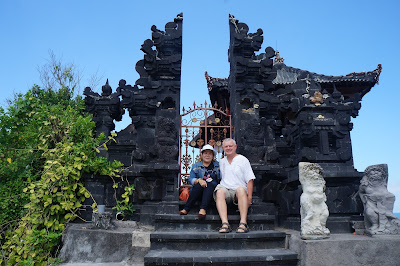 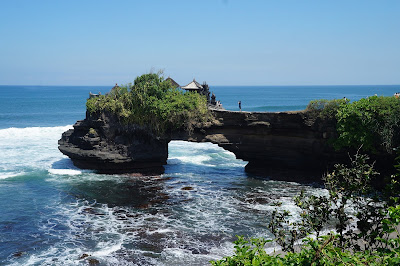 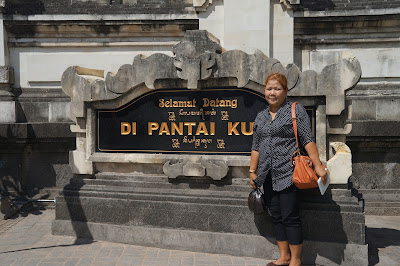 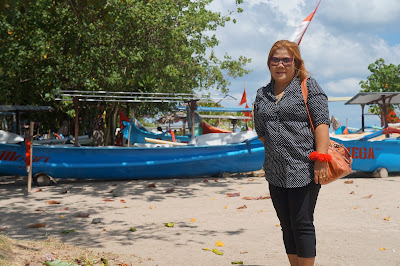 The Bludger was playing Tour Guide.

On our journey from Koh Samui to Bangkok, Alan and I had a little time to visit the Surat Thani Night Market while we waited for our connecting bus.
As we walked there Alan mentioned that he didn't think that people here were quite as friendly as on Samui. Thirty minutes later our view was totally different.
We entered the market and looked at a few stalls. It was fairly standard night market stuff with a food section selling traditional Thai snacks including deep fried chicken, various meats on sticks, curries, noodles and rice meals etcetera. We did see some some foods that we had not seen before in particular what looks like a waffle folded in half with various fillings. 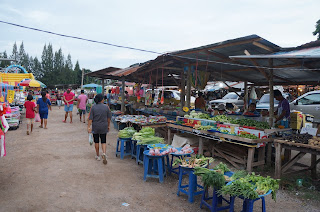 In that browsing period we spoke a few quiet words with some of the vendors, who were friendly enough. But then Alan decided to buy himself a new wallet. Once the transaction was completed you could feel a buzz of excitement go around the market, as we were now not just tourists but tourists who bought stuff. We could see and overhear the girl who sold the wallet turn to the next stall holder and issue a string of Thai with the word "farang" thrown in. Farang means foreigner or Westerner and we guessed that the gist of the conversation was that a farang had just made a purchase from her.
From that moment on as we walked around picking up little bits of foodstuffs from the various stalls people were eager to speak with us and show us their goods. One lady with very good English and she told us that she had worked in a hotel in Samui for some time. A man tried to encourage his daughter to speak with us and another lady showed me her baby.
A nice group of people, we left that market with everyone having their lives enriched just a little.
The Bludger was happy to spread some good will and enjoyed the food greatly.
Posted by Unknown at 18:32 0 comments