I returned to the hotel via a rip off tax driver who over charged and dumped me out before reaching the hotel. Phuc met me outside. I could see no obvious signs of eye trauma. Whatever the operation was it was 6 days ago now and it was impossible to get from her anything that I could understand. 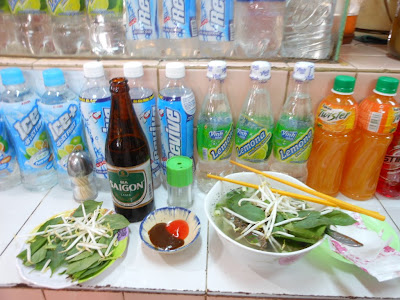 We had lunch in the nearby Ben Than markets and then wandered around shopping. An eventful time in the course of the next hour the following:
1. Assisted a fellow tourist how to find the Ben Than Markets. Gosh I felt like a knowledgeable local.
2. Assisted a German tourist who had a sudden fit. Cool calm and collected (really) I took charge ensured that he was safe and comfortable, stopped people trying to shove Lime and drinks into him, stopped people calling for Police and Ambulances - generally not needed for a mild fit and talked to him in German. When it was passed helped him into a taxi with his companion and instructed the companion what to do.
3. Assisted an Israeli tourist who was the subject of a drive by motorcycle bag snatch. The girl was stupid and did not learn her lesson as afterwards she continued to walk along the edge of the road very vulnerable and unable to comprehend that she was an easy target.
I have no idea what Phuc was thinking but once this was behind us she demanded a Taxi and then whisked me off to a mystery destination.
This turned out to be the Suối Tiên Theme Park, some 20 km from the city centre. 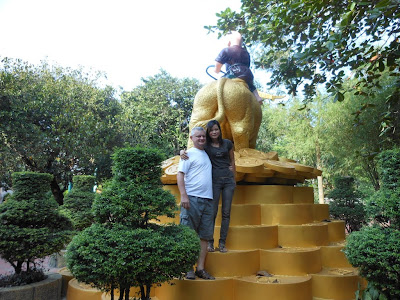 Not that I am into theme parks but it was a lot of fun. We wandered around a crocodile enclosure and fed the crocs with pieces of meat dangling from a bamboo fishing rod type contraption. 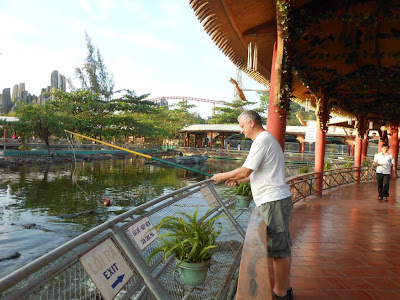 We also looked at animal enclosures and went into a freak tent. This consisted mainly of baby animals or foetuses including those of chickens, pigs, sheep etcetera with some form of deformity. Some were obviously twins that had not fully separated and had 2 heads or 2 rear ends. Some were larger animals with extra legs. Overall it was grotesque and after the initial scientific curiosity had worn off I was glad to escape. 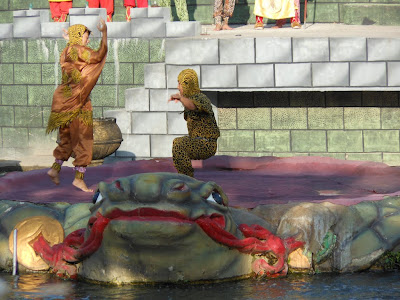 There was also a large show that we were in time to see. The story made no sense but involved what appeared to be two tribes fighting over something. The tribes would put forward a champion to fight until one was tossed, theatrically, into the lake. Boat people arrived and the whole display ended with huge jets of water and an army descending into the arena, brandishing fiery torches, down a flying fox and all ending up in the lake. 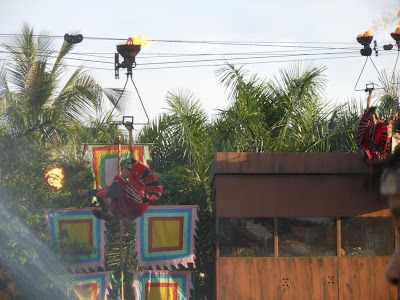 We also went on a ghost train ride and had front row seats as no one wanted to be at the front. It was a full afternoon and by closing time at 5pm we were both glad to be moving on.
Getting home proved to be a bit difficult. There were no taxis, it was peak hour and buses were full. We tried to find some form of transport but after an hour it was looking fairly pointless. We ended up waiting by a bus stop and simply waited until an empty bus or taxi came along. Eventually we caught a small taxi and were taken back to HCMC.
I had wanted to freshen up and put on nice clothes before dinner, but Phuc was hungry and was not willing to wait. We got out of the taxi and walked a few dozen meters before I took charge and steered us into the nearest good looking restaurant. Dressed as I was I felt uncomfortable but we were shown to a nice romantic table for two in a window alcove. To get there we displaced a lady very elegantly dressed in traditional costume. I thought at first that she really was window dressing, designed to be seen by the people in the street to indicate that the restaurant was both busy and full of beautiful people. It turned out a little later that she was 1/3 of a musical trio playing traditional Vietnamese music.

We had chanced upon the Hoi An Restaurant, one of the best restaurants in Saigon. This is 4 or even 5 Star Dining. We chose a Set Menu for each of us this consisted of several courses. The food was Vietnamese but served in a very classy standard. I selected a bottle of French white wine to accompany the meal. If I had been thinking about restaurant reviews I would have made more careful notes of the courses and wine, but I was just taken with the ambience.

It was a USD 200 meal but The Bludger had lovely company and lovely food and drink. Well content.