After a quick toilet break we were off again. Once again I had no idea where. At one stage we were joined by another couple of males on a motorbike. As before we passed through lovely Vietnamese countryside. We then turned into what looked like a private road and into a little nightmare. The road entered what at first sight looked like a village but on closer inspection was a series of souvenir shops and Cafes. I correctly deduced that we were near another tourist attraction. Crowds of males were waving us down and pointing to places to park the bikes. We passed on through these and the guys jumped on their own bikes and gave chase. It was confusing and when we eventually stopped it looked like an argument broke out. With hindsight I don't think it was an argument, often the Vietnamese seem to be shouting at each other, but it is actually just the way they speak.
I was loaded onto the back of a bike with one of the males we went to some sort of office and then I loaded up again and we were taken up a most spectacular mountain road. This road had many fine views across the Mekong delta and rice paddies, but I was not allowed to stop to take photos. At the bottom there was a check point and the driver handed over what was an obvious entry ticket for me. At the top...well wait and see.
I have seen this a few times in my travels to reach some places you are not allowed to take your own transport and must rely on a guide. I don't know the reasoning, possibly to stop you straying and getting lost, possibly to provide some income to locals, in some cases to prevent the roads and tracks deteriorating too much. Anyway that is the situation that I found myself in. 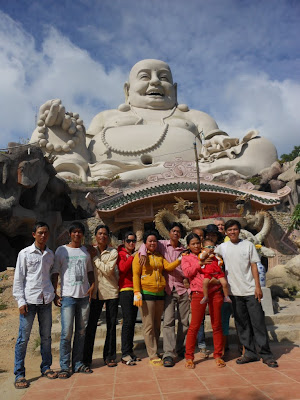 The rider took me to the top to a place that I believe is called Tượng Phật Di Lặc. This is a lake at the top of the mountain surrounded by a Pagoda complex and a huge statue of Buddha. The rest of the family were already there and we spent some time exploring the Buddha and surrounds. More frustration we then sat in a cafe for no apparent reason other than have a cold drink and then disapeared back down the mountain. I would have liked to walk around the lake and explore the Pagodas but that was not on the agenda. 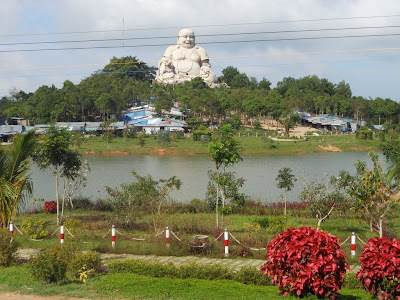 We hit the road again and the group split up more by accident than design I hope. My rider stopped, had a phone conversation and then we entered a roadside cafe and waited. We had more drinks. Suddenly we were off again and taken to a place described as Phuc's grandmother's house. Phuc, sister and mother were already there and looked like they had been for a little while.  Since I had met a grandmother the day before at lac Quoi, I was not sure if this was a title of respect or a real grandmother. With hindsight I wonder about this delay was it innocent or sinister allowing time for some briefings to go on? Anyway we finished the beers and then headed off again. Back home this time. 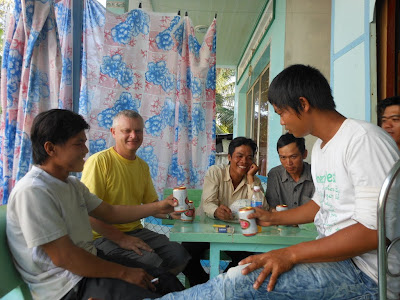 I had a lot of thinking time on the back of the bike and things were not adding up for me. Her medical expenses I strongly suspected were way below what I was asked to contribute. I had a strong feeling of being ripped off. Going through my bags as she did was not behaviour that many societies would condone. I was definately being taken advantage of.
Later that night I spent a lot of sleepless hours with my suspicions slowly crystalising into a definate feeling that I was being played as a sucker. Against that though was the wonderful and what looked like genuine interactions with the family. Surely not everyone could be in on a scam? Would the parents really condone a foreigner sleeping with their daughter when the only desire was to extract money from me. I hope not.
Dinner that night was at a nearby restaurant where we had hot pot once again. It was good food and plentiful. With more beers.
The bludger was troubled.
Posted by Unknown at 17:30