We got up early as we had a bus to catch and headed off to what passed as a bus station. Hotel front counter was unattended and only the night guard was awake to let us out.
Almost at the bus station when oops, major mistake, my passport and Phuc's ID card were still at the hotel. A quick U turn, back to the hotel and check out properly, then back to the bus station. We still had time for a bowl of noodles and wait before the minibus arrived. That means I lost about 30 minutes sleep! 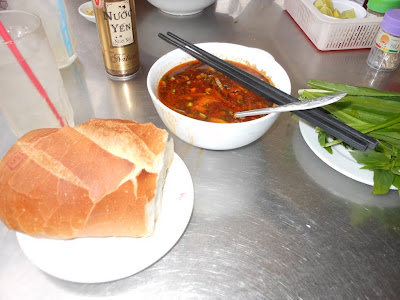 Our bus was heading to Tri Ton with final destination Lac Quoi (pronounced Lack woy) where Phuc's family lived. We were only in the minibus about 15 minutes when it dumped us in the carpark of a large shopping centre. Shortly a large long distance bus turned up and we were shepherded onboard.
Long distance buses in Vietnam are not by any means luxurious. This one had windows that opened. It was hot and the only welcome relief came from the air blowing in through the windows. Unfortunately the Vietnamese don't like draughts so most windows were closed. I was the minority wanting them open.
The journey was relieved by travelling salesman who boarded the bus. The first one got on at a rest stop and harangued us with a travel bag full of goodies. I explain more about these people in a later post. Think of a late night TV infomercial but rather than call this number with your credit card details you can buy on the spot. It is all junk.
During the trip Phuc met a man who lived locally. Lam was a nice man and when we crossed the Mekong by Ferry I stepped off the bus, to stretch my legs and relieve my numb bum, and met Lam at the bows. He convinced me to walk off the ferry with him, rather than getting back on the bus.
The ferry crossing was interesting. At this time of year the Mekong is flowing quite rapidly and the ferries cannot use all of the assigned docking points. They therefore jockey for position to use the docks that are open. It all seems to work however.
My trust in Lam was rewarded as the bus stopped to pick us up on the other side. Phuc, and a couple of other passengers, were leaning out of windows looking concerned. I felt happy about showing a bit of independence, even in such a minor way.
Nominally starting at 7am, we had 2 rest stops and arrived in Tri Ton at about 3pm where we had a wait until another minibus took us the rest of the way. While waiting Phuc took out my Tablet which caused a bit of interest for the locals.

On the bus a young man also introduced himself to me and wanted to practice English. I was happy to indulge for a little while. He was a trainee accountant about to Audit a company.
By this stage in the journey social barriers had broken down. Food was shared amongst fellow travellers and conversations had been struck up. It was quite a social gathering and I was drawn into the general goodwill, even though no one could understand me. It was nice.
After arriving at Phuc's parents place I was treated like a long lost family member. That is to say I was almost totally ignored. I went around each person plus neighbours to say hello. After that I felt a little bit awkward.
I had brought Phuc's mother a present. Phuc took the present, opened it and then disappeared. I was a bit put out by that. It was my present to give. But I built a bridge and didn't sulk. Apparently I got a thank you.
Shortly after arriving 2 men turned up in white T-shirts and green trousers. I looked at them and figured they were here on business. They left after talking with the family. After a little while I was loaded onto the back of a motorbike and we went to a nearby office. The same men were there plus a person in uniform, who I believe was a policeman. It turned out that I had to be registered as a guest. Phuc and her mother had some discussions with the men, my passport was handed over and scrutinised and a ledger filled out. At one stage there was an attempt to pass money across the table but this was rejected with great theatricality.
I found out later that I was allowed to stay with the parents but Phuc was not allowed to be under the same roof. I found this amusing as the thought of any nocturnal adventures under the roof of the parents was about the furthest thing from my mind.
But that worked out in my favour as the 2 of us ended staying in a nearby hotel. The hotel had a shower a squat toilet, air conditioning and a relatively comfortable bed. I had been wondering about sleeping, cleaning and toiletry arrangements. I am broad minded but the thought of jumping into the lake for a wash was not thrilling me. And the toilet was a platform over the same lake. It was not much of a hotel and we were locked in from about 11pm until 6am each  night. Literally, behind steel gates. I guess it was for our protection, both from burglars and midnight police raids, but I also wondered how we would get out if there was a fire.
I should probably just finish with a bit of Geography. Lac Quoi is just on the Vietnamese side of the Cambodian border, south and west of Ho Chi Minh City. At this time of year a stretch of flooded land separates the two countries. When it is dry you can probably walk into Cambodia. This is An Giang province and considered part of the flood plains of the Mekong. Look at a map and find Chau Doc and Ha Tien, it is about half way between the two. Height above sea level 4 metres. Google Earth shows dry land, but at this time of year it is still flooded and only small strips of land are above water and safe to walk and drive upon.
All things considered the Bludger is having an Adventure.