Today was the day to meet Phuc's parents, and as it turned out a big chunk of family.
We left the resort early and made our way to Vong Beach where the Superdong hydrofoil leaves for the mainland. This is a journey of about 90 minutes to the port of Rach Gia. No time to explore Rach Gia, we negotiated a taxi trip to where Phuc's family lives.
Leaving Phu Quoc there were 4 of us, Phuc's 10 year old daughter Trinh (pronounced Jin) who is extremely cute and another 3 yo child who was being taken back to his mother. Happy families. I think that I acquitted myself well, but I was glad when I could relieve myself of fatherly duties.
Phuc's parents live at Lac Quoc about 35 Km from Chau Doc in Vietnam, they have a small block of land and farm fish. Their home is very primitive, spartan and minimalist from a Western perspective. I was reminded of early Australian pioneers homes, where you used any materials to hand to build. 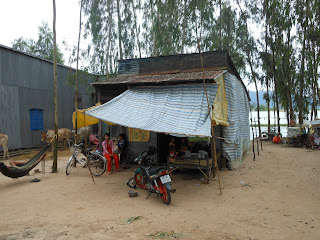 Language dificulties prevented any level of conversation, but Phuc's parents were welcoming and her mother had gone to some trouble to meet me as she was wearing make up and nice clothes. I was obviously expected as a large number of neighbours were congregated. I smiled a lot, said hello in Vietnamese and did my best to show myself in a good light.


I was treated to a lovely meal of lake fish, about the size of large anchovies. The fish were gutted, fins and head removed but back bones were left in and I have to confess that I am not a fan of small fish with bones left in. I ate and was polite and complimentary. There was nothing wrong with the meal, just my western upbringing and prejudices.
Spending all afternoon there, there was time to meet neighbours, observe the work life and help lug a tree around. I spent some time with the children helping them practice English.
I had begun to wonder about sleeping arrangements. The house had a double bed downstairs and what looked like more sleeping accommodation on a higher split level. I was not sure who and how many were sleeping at the house. I assumed the parents, but there was also a daughter with 6 children. I wondered if I would be sleeping on a bed, with Phuc, or various other family members. Whatever it was going to be tight.
As it turned out Phuc informed me that there was no bus on Saturday, the next day, to get me to Saigon, so she and I were taking a bus that night. I was partly happy as I was not going to spend a night in the primitive conditions but also disappointed as I was looking forward to the challenge.
The Bludger will describe the bus trip and next day in a new post.