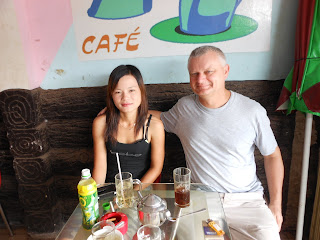 Nick Smith
Nick@nicksmith.info
Sent from my Acer Iconia A500 Tab


An unevenful flight from Darwin to Saigon. I arrived late and with time differences, by the time I got there I was too tired to explore. The room was quite nice, with air-conditioning, hot water and a comfy bed.
The next morning with a few hours to spare I walked to the Ben Than market which was close by. I bought breakfast which was thick rice noodles in a strong broth with crab and other seafood. It was very nice. My meal cost 30,000VND and i intended to pay with a 50,000 note but inadvertantly gave them 500,000 which caused some consternation. I almost walked off before receiving all my change. They were very honest and made me wait.
While in the market I bought a traditional hat, a Non La, before wandering off. I meandered and came across a book store where for the princely sum of $20, I was able to purchase 2 Vietnamese/English language dictionaries, a cook book and a novel. I could not have bought one of those in Australia for that price.
I stopped for a coffee and by the time that i had finished it was time to go back to the hotel, change, pick up my bags and go to the airport. The taxi that took me back to the hotel was a shark, during the trip the fare magically jumped up when i was not looking and he struggled to find change for me. We got it sorted eventually. The trip to the airport was much longer and only 3 times the price back to the hotel, confirming in my mind that i had been ripped off.
It began to rain quite heavily and i was concerned that my flight may be delayed. However it took off on time and when I arrived in Phu Quoc it was dry, warm and sunny. In fact the weather has improved quite significantly since I left just on 5 weeks ago. Not as humid, slightly cooler and less rain. It is the tail end of the wet, and hinting at the beautiful weather to come.
The objective of this return visit met me at the airport. Her name is Phuc, and since that initial Ph is pronounced like physics it is an unfortunate name. No sniggers please. We headed to the resort that I had booked. Check in was not entirely smooth as she had lost her identity card. This is a big thing in Vietnam as all hotel guests have to show proper ID. The hotels generally retain the passports of foreign tourists, all local Vietnamese carry photo ID. This rule is not strongly enforced in cheap places of dubious quality.
Anyway we got in but were visited a couple of times by the hotel security, once to get further details of Phuc, and once to bring in a printed list of hotel regulations. Gems in the regulations mentioned zero tolerance to prostitution, gates shut between certain hours and no unregistered guests in the rooms. Short of kicking us out the message came through loud and clear.
During the afternoon we reacquainted ourselves with each other and in the evening had dinner at the restaurant in the night market where we had first met.
Nick Smith
Nick@nicksmith.info
Sent from my Acer Iconia A500 Tab