Waking early as the day gets light about 5:30am. I could tell by the quality of the light coming through the window that it looked like an awesome day. I poked my head outside and it was indeed, no wind, little cloud cover and the promise of a hot beach day ahead.
I could hear a boat engine working away just beyond the beach, and when I investigated I could see a fishing boat working just off the beach in front of the resort. It caused some excitement with myself rushing to grab a camera, other tourists doing the same and even some of the staff stopping work and watching proceedings. I spent a little time watching the men reel in the nets. 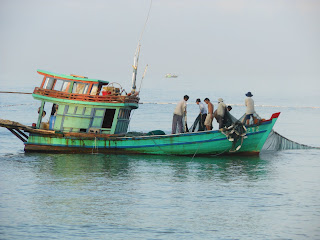 Phuc and I shared breakfast and then hopped aboard our chariot, the scooter, and toured the northern part of the island. Heading generally north of Duong Dong we travelled on some pretty ordinary dirt tracks at times and then some better quality roads. We passed turn offs to some expensive resorts such as Mango Bay. Due to the isolation caused by the slow travel times, of necessity these resorts are pretty much self contained.
The road ran inland but eventually came back to the coast at the tiny village of Cua Can. This is a very pretty part of the island with isolated fishing villages, deserted white sandy beaches and palm trees. We stopped on several occasions for photographs, once for a cold drink and again at a fishing village where the locals proudly showed us a turtle that they had recently caught. I think that it was designated for a meal. We saw pepper farms, fish and shrimp drying in the sun and shrimp boats working the shoreline. With the weather being sunny it really was a pleasant journey. I was tempted to swim but Phuc wanted to press on. 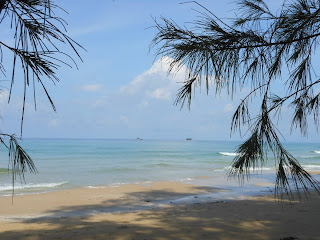 We came to Ganh Dau, which is the village and region at the north western tip of the island. The village itself is very pretty, consisting of typical ramshackle houses and construction along the shoreline. It is quite a well sheltered harbour and the harbour is filled with fishing boats. After wandering around we chose a restaurant with a view of the boats to have a refreshment. The eating area was built over the water and it was a million dollar view for peanuts. While seated we were approached by some of the local children who soon lost their shyness and wanted photos taken and to see themselves in the pictures. One of the older girls took my camera and wandered around taking shots at random. I held my breath as the camera was held over the water, but it came back safe sound and dry. We nibbled on goodies bought at the nearby market. 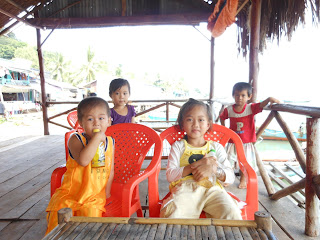 Following that we had a brief boat ride out into the harbour and to a fish farm. The farm is composed of large nets strung below the floating platform which form underwater enclosures with holes too small for the fish to escape. This farm had predominantly mackerel but I later saw others with sea urchins, crabs, shell fish and other fish types.
Returning to shore we left Ganh Dau. The rest of the trip then seemed to degenerate into a rather long, boring uncomfortable motorbike ride. At first we travelled on low quality dirt which at times slowed us to walking pace. While only 17km long it took well over an hour and needed constant attention to avoid the ruts, pot holes and boggy patches. Eventually we got onto well formed bitumen, but even that was a blessing in disguise as for most of the length it seemed to be under construction which required detours and driving on yet to be sealed parts. However, unknown to me, we had been driving a large circle and about the time that I was about to give up the driving we made it back to Duong Dong and hence to the hotel. 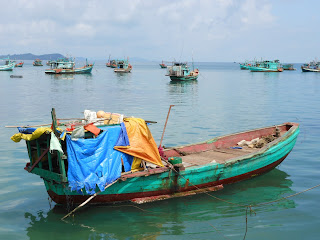 The afternoon and evening formed what was becoming a more familiar pattern with Phuc disapearing home for a while, then reappearing before heading off to work. I swam, had lunch and then went to the night market later on for dinner.
The Bludger is living the dream.
Posted by Unknown at 14:32