Doing my best to get out of Darwin and onto a flight to Bangkok.
Last minute cleaning of my apartment before handing in the keys. As normal it took much longer than expected but the place was spotless. Despite that the Real Estate Agent came back with a list of issues and kept some of my bond money. Dust on the external balcony was one of the issues. They had inspected 3 days after I left and a huge storm had been through. Petty.
After dropping the keys I had a bit of last minute business to do, waiting on a bill, which I ended up not paying, and needed some travel cash. Then I dropped my bag at the Airport and put it in a luggage store. This was to negate having to lug it around for the afternoon. The car was then driven to the storage facility and I made my way back to Palmerston Bus station where I was able to catch a bus that took me close to the airport. I hoofed it the rest of the way.
That got me to the airport in time to check in and I was looking forward to relaxing and taking it easy.
However there was a problem. The airline would not let me on to the flight because I had no onward travel ticket out of Thailand.
From my point of view this was crap. It was my intent to travel overland from Bangkok to Singapore and fly home from there. As my date out of Singapore was flexible and at this point unknown I had not booked anything else. The airline would not budge and I had no opportunity of booking something at this stage. Bureaucracy was getting in the way of a holiday and almost causing grief on day 1.
However a compromise was found and I was allowed to travel as far as Singapore where I would change flights and have a 10 hour stop over. During that time I would easily find some onward travel that would please the airline.
The flight was uneventful and the "normal" delay not worth mentioning.
In Singapore I stayed in the Transit area and hit the Internet to find some travel options. For those who have never been to Singapore airport it has 3 Terminals, with a 4th on the way, all interconnected, with shops, restaurants, pool, Hotels, free wifi and pretty much all that you need to live on. If you had money you would never need to leave the Transit area. Anyway I found a ferry ticket from Satun in southern Thailand to Langkawi in Malaysia for about $10. This should be enough to satisfy the airline and I decided that I may even use the ticket.
So with that done I checked into the Transit Hotel and had a few hours sleep. It was late and I was tired and managed to find a Mojito in a bottle at a supermarket and take it to my room. The Mojito was quite drinkable although made from Vodka not Rum. I don't get that, it cannot be a Mojito surely? 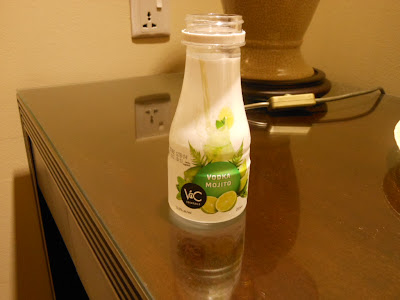 The Bludger slept.
Posted by Unknown at 10:38