I started my day with a short walk around the nearby streets to orientate myself.
After breakfast I checked out of my hovel and dropped my bags at the new place. I was able to check in straight away.

The main objective of today was to explore the ancient city. Ayutthaya was the capital of Siam from about 1350 AD until 1767 when it was destroyed by the Burmese army with much raping and pillaging and destruction of the city. So today the ancient city lies in ruins, although some parts have now been restored. The modern city of Ayutthaya was built apart from the ancient city.
The ancient city is nowhere near as impressive as say Angkor Wat but the ruins and still standing towers have some grandeur to them.It is also of great significance in Thai history.
On the map it, the historical park, did not look very big, so I decided to catch a motorcycle taxi to the main entrance and then to walk around. A decision that I later regretted as broken toes and lengthy walks on hot days are not my cup of tea.
Walking around did however give a great perspective and on a later occasion when I retraced my journey by motorbike it was very tempting to just zoom around and not stop and take things in. I walked around a seemingly endless procession of Wats and the buildings associated with them. Some were modern temples in daily use and well maintained, some were the ancient ruins. At one location is a massive reclining Buddha.
I later saw pictures of this surrounded by water when the area flooded a couple of years ago. The city is actually built on a large island which is formed by the confluence of 3 rivers. The rivers are navigable and one can see huge barges towed by tugs making their way up and down stream to or from the Ocean. This was one reason for putting the capital here, it was a major shipping and trading port.
The ancient city is impressive and gives an indication of what grandeur it had in the past. It is sad to see it in ruins, but lets face it the city was sacked over 350 years ago and was then lost to civilisation until quite recently. We are lucky to see it at all, in any condition. 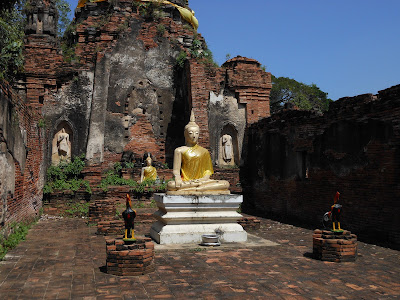 I cabbed it back to my accommodation, well that is to say on the back of a motorcycle taxi.
I showered and rested and in the late afternoon decided to fill up my water bottle. There was a filling station, a bit like an ATM, basically at the end of the street where the hotel was located. Maybe 100 metres away. Filling a water bottle is cheap and environmentally friendly as you re-use your plastic bottle, the water is filtered and generally UV treated so safe to drink even for Westerners.
As I walked by a house near the end of the street there was sounds of merriment. Glancing in to their courtyard I could see a group of Thais having drinks. Earlier I had noticed a white man outside this house having a cigarette and we were on nodding terms. One of the ladies called out to me and said hello. I paused and replied and we had a brief conversation. Before I knew it I was sitting down and sharing drinks with them. The lady who called me in spoke quite good English and we had a little chat along the lines of where do you come from? how long are you staying? etc. We were soon joined by my cigarette smoking companion, who is also called Nick, and it turned out that he married one of the girls at the party and was now living here in Thailand. He is American.
The party continued and when the Whiskey ran out I felt that it was my duty to buy another bottle so I never got to dinner that night, but had a great night with my new found friends. During the course of the evening I was invited to accompany them the next day to a lakeside resort to go swimming. I hesitated as I did not want to overstay my welcome, but decided to join them anyway.
The Bludger was pretty drunk when he got home that night and it was obvious that one of the ladies at the party had taken a shine to him, even though she could not speak English and I cannot speak Thai.
Posted by Unknown at 16:41