Rising early I duck walked into the main town and a had a nice breakfast of something. (see Picture).
I arrived in the city in time to see a procession of some kind heading to the local Wat (temple). People dressed in ghoulish attire and many looking like "Goths". The procession had drawn a big crowd so it must have some significance.

After that I headed back to my accommodation and hired a motorcycle because walking sucked big time.
I rode out to the Sukhothai Historical Park, about 4km all up. First stop was Wat Traphang Thong, a lovely restored temple surrounded by a moat and featuring a footprint of Buddha.


The next stop was Wat Mahathat the principle Wat of old Sukhothai. There are a number of Chedi's (Stupa, a kind of hollow tower) here, of which the architectural style shows Khmer influence. The old Khmer empire had a huge geographical reach. 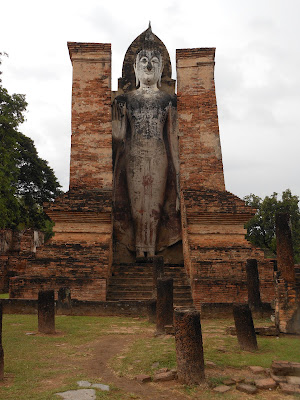 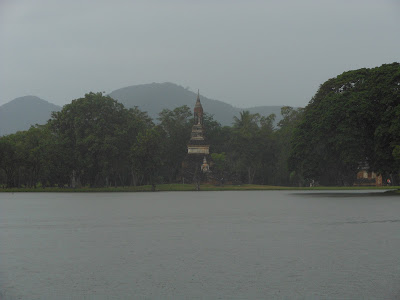 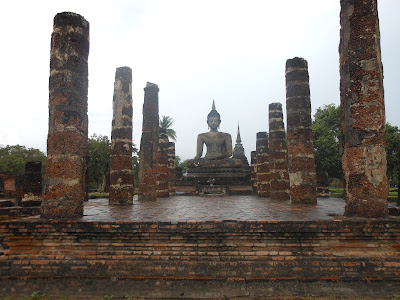 I also visited Wat Traphang Ngoen and Wat Sa Si, by this time I was getting more than slightly bemused and befuddled after a large amount of Chedis, Wats and other buildings not to mention Buddha. 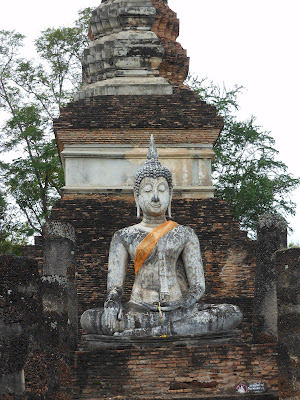 I kept at it though until I was almost trampled to death by a herd of rampaging elephants, that like me had seen far too much of the temples and were now doing a runner. (Joke) 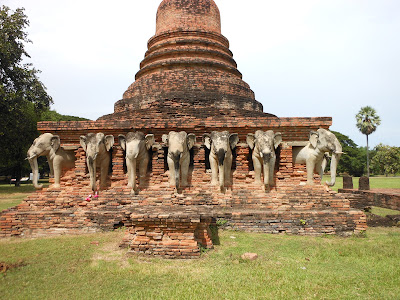 And I left them to the tender mercies of 4 wise men. 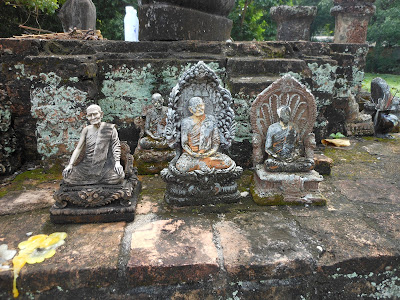 I saw more, but even describing it is too much.
I returned to my hotel and returned the motorbike, I relaxed for a while.
That evening I walked into town and had a meal in a restaurant overlooking the river. Nice food, not worth blogging about.
The Bludger had a great day.
Posted by Unknown at 16:58