July 28, 2013 I awoke early and had a walk along the beach. At this time the day was cool and the water felt warm. A solitary fisherman was casting his line from some rocks, joggers ran by and the local dogs lay there protecting their territory. The water was calm, the sky overcast, there was little or no wind and the sun had not yet risen to heat the air. Despite this it was warm and I built up a sweat walking along the sand which is quite soft underfoot. 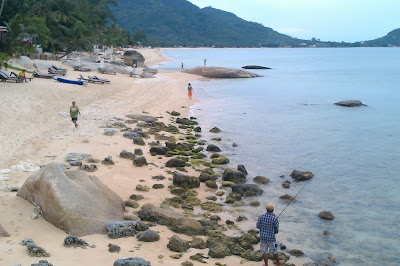 At this time of day there is little open and I ended up in a bakery for a breakfast of omelet and a plate of fruit. Getting breakfast before study looks like it may need some forethought and preparation as the hotel does not include breakfast other than Tea and Coffee and some bread and a toaster. Later I took a longer walk and visited a nearby waterfall and a viewing platform part way up the nearby hills. It was a slow walk up the hill due to the heat and my lack of fitness. The view was not spectacular but worth the effort. 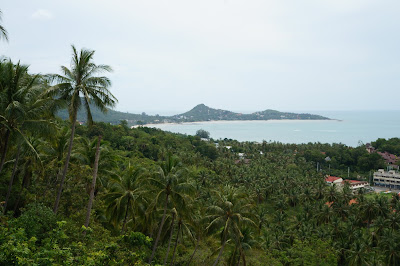 At the viewing platform I noticed a man coming across the valley on a flying fox. Until then I had not noticed the cables. After dismounting he came up to the platform and we talked for a while. It turned out that his family own the property and have an extensive section of the mountain side that they are turning into an adventure park. The flying fox was in process of being installed and he was testing the run. He took me up to see the start. At this point in time it is a series of cables bolted into the rock, but he explained that they were going to build launching and landing platforms and stairways to make the climb easier. I made my way back to the hotel and picked up a selection of fruit along the way that will become tomorrows breakfast. At lunch time I ventured out for a healthy meal and ended up having an excellent Green Papaya Salad at "Grill Bar". I asked for it spicy and they got the chilli just right not too hot to start with but by the end of it my lips and mouth were on fire, but not overly so. 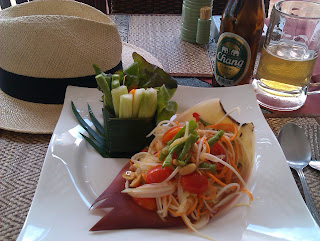 After lunch I had a massage that was not very good. Despite saying no sex I spent the entire hour warding off the advances of my masseuse. Then it was time for a swim and I spent some time in the Ocean. Tick in the box I have swum in the Gulf of Thailand, both from Vietnam and Thailand sides.It was so hot that by the time I had walked back to the hotel, which is not far, I had to cool off in their pool.
In the evening we had our first function for the TEFL course. It was a social evening for us to get to know each other. We assembled at 7pm and walked to a nearby restaurant where we had a reserved area and an open bar. There was also a huge spread of finger food consisting of fairly typical Thai nibbles including Fish Cakes (Tod Mun Pla), Deep fried Prawns, "no name" - which is a vegetarian patty and a few others. Pretty good all up.
After that first night madness ensued and people were seen at various bars over the next few hours.
The Bludger behaved himself.
Posted by Unknown at 21:00