The next major task on my list was to replace the driveway. The concrete had lifted by the action of tree roots, it was decaying and looked ugly, plus it was a trip hazard. In our litigious society it only needed someone to trip and hurt them selves for me to be liable for substantial damages. I dislike people that cannot take personal responsibility.
My involvement with the new driveway has primarily been to specify what I want and then subcontract it out. A good test of my project management skills and a huge test of my patience as contractors work to their own schedules not mine.
Stage 1, take some trees out that lined the fence line and were contributing to the lifting of the concrete. That was achieved with little difficulty, in fact I was not there at all as they chose to come Saturday morning when I had friends over and plans. At the same time 2 large trees taken out of the garden that would cause problems in the future due to their size. I subsequently learnt that they were probably already causing troubles with my drains.
After that I went into limbo as the contractor to do the driveway had to come in to take up the existing concrete. Waiting, waiting... he did not respond to phone calls or voice mail. Grrr.
In the mean time I took the fence down as the tree chopper had suggested that I do so to minimise the risk of damage when the stump grinder came in. 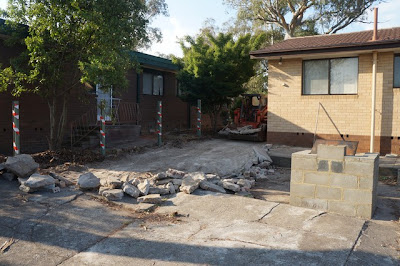 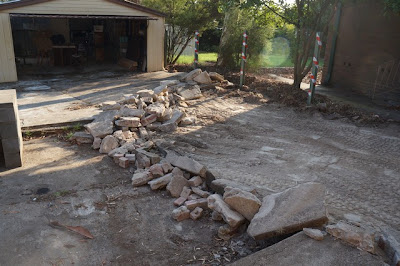 Eventually the concreter came in and removed the existing concrete in about half a day. They had estimated 2 days, but the concrete did not have any reinforcing metal in it and came up very easily. Oh dear, the lack of standards in 1973 when this driveway first went down. I was definitely frustrated at the delay but they did a good job of the removal, didn't do too much damage and they left the place reasonably tidy.
Next step was to get the stumps along the fence line ground down so that the concreters could lay the new driveway. I had kept the tree chopper up to date on what was going on. This meant that I called him regularly and left a message on his voice mail. No indication of whether he had got the messages. The stump grinder turned up on a Sunday. A Sunday! it was all over and done with in a couple of hours. He was a nice guy and did a bit of extra work that I had not counted on, nor was going to pay for.
The concrete removal had "located" some storm water drains. I was told that they were blocked. I could also see that "located" meant broken and partially dug up. So much for a plumber who had very confidently stated that these pipes would be well below the level of the excavations. Fortunately I had a plumber on the way, but that is stuff for another posting.
The plumber came did his job or relaying storm water pipes and departed. A job well done. However in the process he pretty much dug up the rest of the garden. A scene of devestation.
The concreter had arranged to turn up and complete the job after the plumber. He never turned up as promised. He contacted me two days later and said that he would come by on Saturday to check things out. He turned up and decided that some further excavations were needed - he"may" send an excavator around on Monday. Well that didn't happen either.
Sunday the weather turned and it began to rain. For a while the exposed driveway held up, but then when it really got heavy I ended up with a river in my backyard flowing towards the back fence neighbour. I could not see much damage the next day, fortunately my neighbour has let that part of his property go wild, so if there was runoff they will never know.
This meant extra work for the concreter. He sent his excavator people around who started to reform and shape the ground. All of a sudden the air turned blue with swearing and the excavator sank into the earth directly on top of the newly laid storm water pipe. Despite having the camera handy I did not dare take a picture - there was a lot of emotion happening.
To be honest it was no ones fault the excavator man could not know that they ground was still soft from the rain and the trenching work. However he went into defensive mode claiming it was not his fault, and when the pipes were dug up and found to be broken while he had initially said that he heard the pipes break soon changed his mind on that claiming that the damage had already been done by someone else.
I felt like decking him.
Any way it was all cleaned up and repaired.
Finally the day came when concrete pouring was about to happen. A long day for the concreters and 4 trucks of concrete and I had a new driveway.


The Bludger was glad that it was completed. He could go on holiday to Thailand and win a heart.
Posted by Unknown at 16:09