I awoke very early, it was still dark outside, and fought the desire to get up, however by 7 am I was ready to head down for breakfast. A fairly typical range of options for this class of hotel, the Coconut Suites. I had babur ayam (rice porridge with chicken), followed by fruit and then an omelette with Bacon and some chicken rings. I did have a trace of guilt about the hot food but not too much.
The main item on the days agenda was to find the restaurant where I was booked to attend a cooking class. I elected to walk and sought the aid of the reception staff for directions. I was advised to take a taxi, but I chose to ignore their advice and walk. After all it was not far on the map.
I boldly set off, being careful to avoid holes in the foot path, and walked and walked.  Street signs are rare in Bali, but I did find one and referring to my woefully inadequate map taken from a tourist brochure determined that I was still on track. Time was passing however and I needed to be at the restaurant by 9am. I considered it may indeed be time for a taxi but still felt that I was close. Just another few minutes walk and I would surely be there......
However I had not had an opportunity to change money so before calling a taxi I needed to change some money. Up ahead there was an ATM sign so I kept going toward the ATM. At 8:59 I arrived at the ATM and from there I could see my destination! Yay.
I made it basically on time. At Vivai I was greeted by Dean the head chef and person who would conduct the class. Dean proved to be an excellent host and friendly and hospitable. I joined the other two participants and we chatted over a very nice coffee and then a shot glass of chocolate drink to start the day. Dean talked with us and showed us the special coffee beans that are eaten by Civets (Paradoxurus) and shat out and collected to make Luwak Coffee.
After this introduction we piled into a minivan and were driven to and conducted around the Denpasar  market. Having been in plenty of Asian markets it was not new to me but I relaxed and went with the flow. We were joined by “Combat” a young girl whom Dean referred to as a shopping trolley. I thought it a bit rude at first and it had overtones of the western superiority but in a way this made sense, if you could put that thought aside. Combat carried a basket on her head and all the groceries went into it. We didn’t actually buy too much so she had an easy trip. Her fee for this service did not seem much, but apparently Dean was paying double the price that the locals paid.
We headed back to the restaurant. By this time it was close to 11am and I was beginning to wonder how much cooking would be done. Back at the Restaurant I was offered another coffee and then Dean took us through the ingredients that we would use that day. 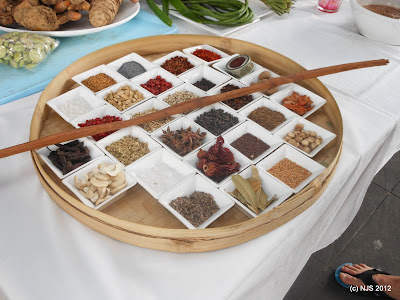 I was familiar with many but there were certainly some new ones on me. Finally we put on our aprons and started on a basic curry paste. By this time it began to become apparent how the day would run. We all had chopping boards and made a token effort at chopping some vegetable. The helpers gathered our chopping’s and then did the hard work of making the paste. And so it went. This was the “glamping” equivalent of cooking, with people to clean up after you, others to prepare parts of the meals and cook. To be honest it was not hard work, more like going round to a friend’s place and having a chat in the kitchen and lending a hand while others did the work.
Between us we turned out a surprising amount of food. We all did little bits and pieces, I ended up stuffing the duck, while the helpers had done all the hard preparation work and then took it away to cook. The three of us also prepped a whole fish each, we scaled it, gutted it, filleted it, pin boned it, and then de-skinned the fillet. That was good learning. We also de-veined a prawn in a way that I had not seen before leaving the shell intact, and prepared a whole squid, which I have done before. It was all jolly nice with the helpers cleaning up all the mess and doing the cooking. In between we chatted and took photos.
By this time we were all getting a bit hungry and the food preparation had got the digestive juices flowing.  By about 2:30 ish it all started to come together. Technically the class was meant to end by 3pm so I was wondering how this was going to turn out.  We cleaned up and sat down at a restaurant table, drinks came out and then plate by plate a veritable feast of Satay, fish balls on lemongrass skewers and corn cakes.
This was just the entrée’s and already far too much to eat. Then came the mains, the whole duck had been baked in banana leaves then the leaves removed and finished in a hot oven. There was a lovely chicken curry, pork curry, rice, a bowl of simply incredible seafood soup and a lovely fresh salad. The seafood was the popular dish of the day, but it was all superb and we had “cooked it ourselves”. By now we had all conceded defeat and then were offered black rice pudding and rum and raisin ice cream. Groan. We all tucked in anyway.

Dean joined us for mains and desert. All day he had been a genial host, willing to explain and share his skills and knowledge. All of the would be cooks were well satisfied with the day.  It was gone 4:30 when we eventually left
I walked back to the hotel which took a solid 50 minutes with stops to change some currency and pick up some drinks for the evening. I was too full to consider eating that night and even the drinks were a struggle to find room for.
The Bludger was full and more than happy.